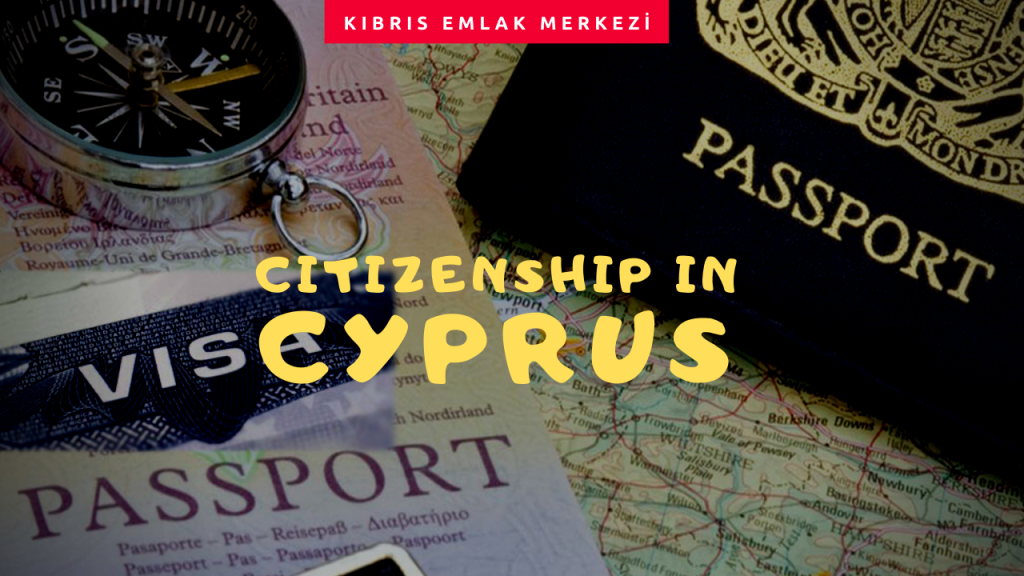 A question frequently raised by many of our visitors here at the Cyprus Real Estate Center portal especially when considering investing in Cyprus is the one about citizenship.

Naturally you would wonder about how to become a citizen when you buy property overseas and look it up on the internet.

Coming from a geographical point of view, Cyprus is an island at the Mediterranean, politically divided since 1974. The North governed by the Turkish Republic of Northern Cyprus (TRNC) and the South globally recognized as the Republic of Cyprus (RoC) Cyprus are at the two ends of the divide.

Due to the division, the citizenship status of the North and the South are different leading to different application procedures.

Things to know about the citizenship in the South

Being an EU member state added significant value to the citizenship of the Republic of Cyprus after the year 2004.

Especially in recent years the citizenship of the South gained popularity amongst wealthy Russian and Chinese citizens with the perspective of becoming an EU citizen straightaway.

When there is a will there is a way, goes the saying. Responding to the great demand by aforesaid citizens some high ranking officials were convicted to take part in bending the rules of the Golden Passport Scheme and creating a gateway for those willing to pay the price. As the scandal became public recently, all illegally issued citizenships are now under investigation by EU and Cyprus authorities.

It would be fair to be noted that citizenship and passports have been given to more than 3,000 foreigners who agreed to invest at least $2 million in the country — a “golden passport” that allowed the holders to travel visa-free throughout the European Union. Due to ongoing weaknesses and exploitation of the program, the ‘Golden Passport Scheme’, initially being a property investment incentive to attract global investors, has now been suspended.

Putting the corruption investigation aside, many people question on how to become a citizen by investing in property in the South.

Conditions to get the citizenship of the Republic of Cyprus

There are 4 ways to legally get the citizenship.

Application for Cyprus citizenship can be submitted by foreigners, who have completed a total of 7 years of legal residence in Cyprus (2555 days of staying in Cyprus) before the application date. The applicant must have resided continuously in Cyprus through the last 1 year before applying. In cases of applicants who are children or parents of Cypriot citizens the time required is 5 years rather than 7.

Foreign spouses of Cypriots who completed 3 years of marriage and 2 years of residence in Cyprus, prior to the date of the application are entitled to apply for citizenship.

Descendant’s applications are categorized by year of birth and status of the parents’ citizenship.

The government of Cyprus as part of its policies to attract foreign investment has established the Cyprus Investment Programme. It gives opportunities for investors to get a Cyprus passport for them and their family with investments starting from 2 million euros. –This programme has been suspended by November 1st 2020

NOTE: Please be aware that many people have been deceived by the promise of becoming Cyprus citizens. Make sure to check facts and beware of fraudsters victimizing people causing financial and psychological damage with the promise of citizenship.

Citizenship of the Turkish Republic of Northern Cyprus

The separate simultaneous referenda held in Cyprus on 24 April 2004 resulted in the majority Greek Cypriot population voting down the UN Plan (75.38% against), whereas the minority Turkish Cypriot population voted for the Plan (64.91% in favour). As a result, the island of Cyprus became a member of the EU with the Acquis Communautaire applied in the South and being excluded in the North.

The TRNC citizenship being recognized by Turkey only does not provide an advantage internationally for now.  However, being a TRNC citizen is important in terms of establishing a business, investing and living more comfortably in the country.

As in every country, there are different approaches to locals and foreigners in Northern Cyprus when it comes to business establishments and procedures of investments. As a foreign individual the cost of establishing a company would be higher and the procedures would be more time consuming for instance.

That’s why many investors prefer to become TRNC citizens quickly.

There are 3 options of getting the citizenship of Northern Cyprus legally:

After 3 years of marriage to a TRNC citizen you are entitled to apply for citizenship.

You have the right to apply for citizenship with a 10-year uninterrupted work permit / business permit / residence permit.

The Council of Ministers is entitled to granting citizenship to foreign nationals for outstanding services to the TRNC in the fields of science, sports, politics and culture.

NOTE: Please be aware of fraudsters falsely promising citizenships in case you are not fulfilling conditions of application. Unfortunately, there are some citizenship fraudsters appearing in the South and the North of Cyprus victimizing people by making promises they cannot keep resulting in financial and psychological discomfort.